In 2018 Denise Mueller-Korenek rode a bicycle at an average of 183.932 mph, making her the world record holder for the fastest pedal bike ride.

What she did was incredibly dangerous drafting behind a racecar on the Bonneville Salt Flats. To be safe on a bicycle, you can’t even go one-tenth of that speed. How fast is safe on a bike?

Although most people can easily cycle at 10 to 15 miles per hour, the safest pace to ride a bike is between 7 and 12 mph on a flat road. This speed is the optimal range to have quick reaction times in case of danger on the road and also lowers the amount of pollution you inhale as you ride.

How Fast Can You Safely Go On A Bike

You can safely go a median speed of 9 to 10 miles per hour on a bike. There are two significant concerns for riders that impact overall safety regardless of the rider’s skill.

Firstly, you need to move slow enough to allow your own reaction time to keep pace with your environment, and on the road, that means trailing other vehicles by about two seconds while not exceeding 12 mph.

Unless you are racing, there’s no healthy reason to go as fast as you can. By simply keeping to a moderate pace, you can minimize the chances of a severe crash and injuries by more than half.

When you have time to react, you can swerve, or throw yourself off your bike in an unavoidable emergency.

The more surprising problem with bike riding is that there is a ‘sweet spot’ for how much pollution you inhale.

If you don’t want your healthy exercise to turn into a potential hazard to your lungs, you need to keep your pace between 7 and 12 miles per hour.

You are breathing faster at just a couple of mph outside that safe zone, which makes you take in more pollution as you move forward. Not all bike speed safety is about crashes and broken bikes.

What Is Considered Fast On A Bike

The average cycling enthusiast travels 10 to 15 miles per hour without too much difficulty and can maintain that speed for a fair distance.

By the time you reach 20 mph, you are going faster than most. However, once you hit thirty, even going downhill, you are at the top speed for many bikes.

I would say that any speed over 20 miles per hour is fast.

Professional cycling racers on flat roads usually move around 25 to 28 miles an hour. BMX bikes go over 30 down the ramp at the Olympics, and downhill MTB riders can hit 30 to 35 mph at times.

Meanwhile, an Olympian bike racer can reach speeds over forty-three miles per hour.

Can You Go Too Fast On A Bike

You can go too fast on a bike in three ways. The first and simplest is the example I gave above of inhaling more than a normal amount of pollution, which is terrible for your lungs and health.

Secondly, you can go so fast that you couldn’t possibly react in time if something went wrong. In this case, you are not in control beyond your own pedaling and generally where you aim the front wheel.

Finally, you can go too fast for the bicycle itself. Every moving part on a bike has a failure point.

Most bicycles can handle sustained speeds, but too much is too much, and it can cause parts to loosen, break or fall off.

More importantly, this won’t always be instantly problematic. Some damage is cumulative or insidious and takes time to create a noticeable problem, but by then, it’s too late to do anything but repair and replace parts.

What Is Legally Too Fast On A Bike

Did you know that you can be pulled over and ticketed for riding too fast on a bike? Bicycles are subject to the same laws as other vehicles on the road.

For example, if you exceed the posted speed in a school zone or a construction zone, you could end up paying significant fines.

Moreover, in most cities and towns, any mounted speed is too fast to ride on a sidewalk. You must dismount and walk unless you’re in the road or on private property.

Cyclists aren’t generally at risk for breaking speed laws on larger roads, but it’s still wise to have a speedometer if you’re planning to ride on the road.

This exceptional, weatherproof speedometer has other functions, but it will easily keep track of how fast you’re moving.

You get everything you need to attach the Velo 9 to your bike, plus it comes with a battery that lasts up to three years.

At just 28 grams, this speedometer won’t weigh you down, and it even tracks your calories and carbon offset.

Learn all about this incredible speedometer and stay safer on the road by clicking here. 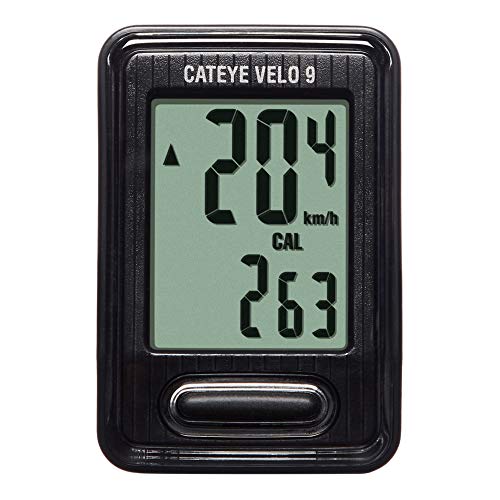 How Fast Can A Bike Go Downhill

Some mountain bikes are purpose-built for long downhill descents. An average MTB goes twelve to thirty miles per hour downhill.

Naturally, you can exceed those speeds on custom bikes, or if you are a highly skilled athlete, but most rides aren’t clocked on a speedometer.

There are lots of fast bikes and riders between the average and the record holder.

Although I don’t recommend trying to go dangerously fast, especially without professional training, the world record holder for downhill speed on a mountain bike is Max Stöckl.

Staying safe on your bike means choosing a moderate pace and paying close attention to what is going on around you at all times.

Any speed over 12 mph is dangerous because your reaction speed may not keep up, and your lungs will be taking in more than average amounts of pollution.

Here are more helpful tips to know about how fast is safe on a bike.

Staying safe on your bike means knowing how fast is too fast. A good rule of thumb is to remain under 13 mph because anything more than that can interfere with reaction times and cause you to inhale more pollution than your body is used to processing.

While the fastest riders in the world can reach speeds of one hundred to almost two hundred miles per hour in extraordinary circumstances, those rides are exceedingly dangerous.

Stay safe while cycling by abiding by local speed limits, listening to your body, slowing down enough to breathe and react normally, and paying attention to your surroundings at all times.

link to Can You Ride A Bike With A Bent Rim

Any bicycle enthusiast or regular rider will have had to deal with a bent rim on some occasion. But can you ride a bike with a bent rim? If you enjoy cycling, a bent rim can be a giant nuisance....

Continue Reading
link to Why Do Some Bikes Not Have Kickstands

Any cyclist knows that a bicycle cannot stand on its own, so why do some bikes not have kickstands? As it turns out, there are several reasons why and I have the answers right here for...