How Do Bicycle Reflectors Work – Bicycles In Motion
Skip to content

Bicycle reflectors are sometimes called luminous tags or badges, but that’s a misnomer. It’s a common misconception that reflectors create light, but they aren’t capable of making new illumination.

Instead, they rely on light from outside sources to make their unique glowing effect. How do bicycle reflectors work?

Bicycle reflectors work because the inside is made with tiny opposing reflective surfaces like a pair of mirrors facing each other. These reflectors are coated in beads or prisms and redirect light, bouncing any light that comes in back in the direction it came from. Anything that puts out light will pass through the transparent outer plastic and reflect.

How Does A Bike Reflector Work

Bicycle reflectors work because they live up to their name by literally reflecting light from hundreds of tiny reflective surfaces.

When we see, our eyes are actually perceiving the light that lands as it bounces back to us.

Everything absorbs some part of the light spectrum, which is what gives it color. Reflectors don’t absorb color, though some have tinted outer plastic to make them red or amber.

Bike reflectors are made to bounce much more than the usual amount of light back. The better and brighter a reflector is, the more light it sends back to the source.

Just as a mirror sends an image of whatever is in front of it, the two opposing mirrors (or reflective mirror-like surfaces) capture light and show it.

Bike reflectors only work part of the time. On the one hand, even a mediocre reflector makes a bicyclist a lot more visible to cars with their lights on.

That cuts down on nighttime road accidents and significantly reduces cyclist deaths after dark, but that’s only part of the problem.

The downside to reflectors is that they rely on an outside light source. That means other cyclists and pedestrians often won’t see a nighttime bike rider, leading to accidents and injuries.

Worse still, a car with the lights turned off or broken won’t activate the reflectors. That can lead to a dangerous situation, so bikes also need powered lights.

How To Fit Reflectors On A Bike

Fitting reflectors on a bike is easier than you might expect. I will walk you through the process step-by-step, so you can install your own reflectors.

This is a fundamental skill every cyclist should have, and fortunately, it will only take a couple of minutes.

If you still feel like you need a visual example of how to put on reflectors, then I recommend checking out this video from Black Mountain Bike.

They walk you through it with both types of front reflectors, rear reflectors, and wheel reflectors. You can easily see how the pieces fit on any standard bike regardless of its style.

How To Turn On Bike Reflectors

You can’t turn bike reflectors on like you would with a light switch. They are active in the presence of light.

However, the illumination has to point at the reflective surface to be effective, which is why you don’t see bike reflectors shine from every angle.

For example, an overhead streetlight won’t make wheel reflectors shine for a nearby car.

If you want to test your reflectors, all you need is a flashlight. You can turn off the lights or wait until dark for the best view, but even in daylight, you should be able to see some reflected light.

Point the light directly at your bicycle reflectors to see the effect in the way a car on the road would if you were riding toward it.

Are Bike Reflectors Required By Law

Even with your lights, which are also required, your bicycle has to have reflectors. Moreover, bike reflectors are required by law.

All new bicycles have to be built and sold with the proper reflectors in place. However, you can technically remove them for daytime riding as long as it’s not dark where you plan to ride.

Anytime there’s low-light, like in tunnels or at night, your bicycle must have reflectors if you plan to ride in public. Specifically, you have to have six reflectors.

According to Quora, “Every bicycle sold in the U.S. is required to have white front and red rear reflectors, white or amber wheel reflectors, and front/rear facing pedal reflectors.”

Do I Need A Front Reflector On My Bike

In some areas, a front light may be considered sufficient. However, it’s always best to install your front reflector.

After all, you never know when your headlight battery might go out on you unexpectedly.

If you’re looking for a high-quality replacement for your old, broken, or outdated reflectors, I recommend the MFC PRO Bicycle Reflector Kit from Amazon.

These facile reflectors have incredible shine and brightness to help keep you safe on the darkest nights.

You’ll get everything you need with two white wheel reflectors, plus the front and rear reflectors in white and red respectively. You can have a set shipped to your house fast by clicking here. 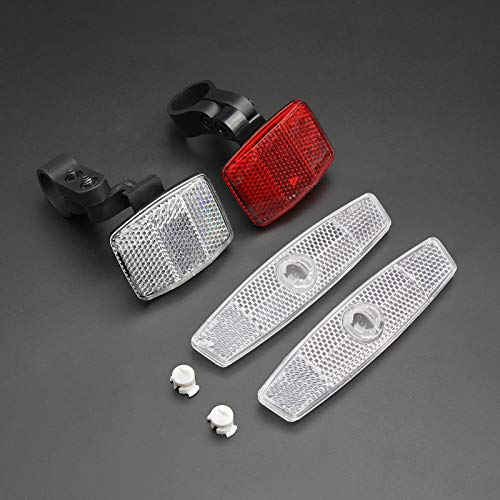 Helpful Tips To Know About How Bicycle Reflectors Work

Bicycle reflectors can save your life. Their ability to literally reflect light back at cars on the road can help prevent accidents and keep you from getting injured or worse.

Here are some more helpful tips to know about how bicycle reflectors work.

Bicycle reflectors use hundreds of tiny reflective surfaces set at angles to one another, so they absorb and reflect as much light as possible.

Any light source will reflect, but car headlights are the most important because the ability to see a cyclist in the dark saves lives.

The only problem with reflectors is that they rely on an outside light source, which means they don’t ‘light up’ on their own.

Though you can take reflectors off in the daytime, they are required by law at night, and it’s a wise plan to leave them in place all the time.

link to Why Does My Bicycle Chain Slip

It's a common misconception that a bike chain has to be tight in order to work correctly, but that's not the case. There should be some play so that the chain can shift gears up and down to sprockets...

As a cyclist, it is not uncommon to need to change your bike seat for comfort or better sizing. It helps to know which seat you need, and if bike seats are universal. Changing a saddle may be...